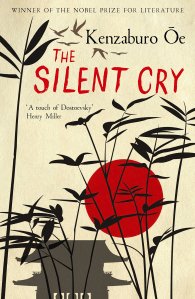 Since I am participating in the 13th Japanese Literature Challenge hosted by Dolce Bellezza, I am now reviewing this book by Japanese Nobel Prize winner Kenzaburo Ōe. In The Silent Cry, we are presented with the early 1960s and Mitsu, a disillusioned husband to an alcoholic wife and a father to a child who is now in an institution. Mitsu sees his life changing when his estranged brother Takashi arrives from America and together they travel to their native village in Shikoku, one of the main islands in Japan. There, they find that there is a shift in local power and one rich Korean magnate is proposing to buy what remains of Mitsu and Takashi’s land inheritance – their storehouse. Reluctantly, Mitsu finds himself drawn into a complicated political situation of the village, while also realising that Takashi starts to wield the unprecedented power over the village inhabitants. The Silent Cry is a slow-paced descent into one kind of a nightmare where the violent history of the village is about to be re-enacted and other grim discoveries made as the relationship between the two brothers takes an unexpected turn. Full of uneasiness and foreboding, The Silent Cy is a subtly powerful work that masterfully evokes the unsaid, the forbidden and the terrifying, getting us close to the real Truth and to the final Hope. It really becomes one of those books you do not have to enjoy, but to simply experience and live through.

There is a curious narration coming from a pitiful, nearly blind husband Mitsu, whose wife Natsumi is suffering from alcoholism. Mitsu is a person stuck in his existential crisis and afraid to face reality. “Awakening in a predawn darkness, I grope among the anguished remnants of dreams that linger in my consciousness, in search of some ardent sense of expectation”, starts the book...“I’ve been sleeping with arms and legs askew, in the posture of a man reluctant to be reminded either of his nature or of the situation in which he finds himself” [Ōe/Bester, 1967/88: 1]. Recently, Mitsu and Natsumi put their only disabled child in an institution and are still in shock because of the recent death of Mitsu’s close friend who died after he painted his head red and hanged himself. When Mitsu’s brother Takashi arrives from America, the mood of Mitsu and Natsumi is momentarily lifted, and we witness a strange internal competition and tension between the brothers. The trio, together with Takashi’s “teenage bodyguards”, then travel to the home village of the brothers, populated by some eccentric characters. There, there is “a delicate balance of power between people and authorities” [Ōe/Bester, 1967/88: 263], and one rich businessman from Korea plans to buy the land of Takashi and Mitsu’s ancestors. Inspired by the history of the village, Takashi tries to rebel, gathering his followers around him. In turn, his brother Mitsu feigns indifference until he can no longer ignore the affairs of the village or his brother’s wild actions which are increasingly directed specifically at him.

Perhaps one way to understand The Silent Cry would be to draw connections between – (i) one person (Mitsu) – (ii) a family unit (Mitsu’s family) – (iii) a village (the one in Shikoku) and – (iv) a nation (Japan). The history, experience, feelings and thoughts of each of those entities/units are reflected in all the rest. The brothers in the story appear opposites of each other: one – a passive, unpopular introvert, another – a dominant, popular extrovert; one – beautiful and another – ugly; one – repressed and wants to forget his family/village past, and another wants to face and “re-enact it”, while marching forward; one wants to deny his state of being human, and another wants to embrace his “creatureness”. So, these brothers and their polar opposite characteristics also represent two sides of Japan after the war or as it reflects on its own history. One side of Japan or a village in Shikoku is forward-looking and craves change, while another part wants to stick to tradition and inaction. The story becomes one where different people are trying to employ different means to come to terms and accept one’s past or seek justification for their previous actions (Japan tries to come to terms with its participation in the WWII; the village tries to acknowledge its past silent acceptance of brutal feudal regimes and violent revolts, and one family (that of Mitsu) tries to understand the deaths of its family members. People in the village are portrayed as so used to pain, that they are no longer realising or recognising this experience -“they fuss for ages over trivialities, with the irresponsible notion that when things finally get quite out of hand the situation will somehow change and solve their difficulties for them” [Ōe/Bester, 1967/88: 69]. In turn, Mitsu is trying to deal with his guilt and shame associated with his disabled son (and also with his brother). Alcohol, sex, sport, active re-enactments of past events, solitude and withdrawal – many means are employed to understand and come to terms with what was going on and still ongoing in the lives of the characters.

In the village of Shikoku, history may just about to repeat itself as the Korean businessman’s supermarket becomes the object of awe and the person behind it is soon associated with some “foreign” evil. Since everyone in Mitsu’s immediate family is a societal outcast (Mitsu has a facial deformity, his wife is an alcoholic and his brother has ties with “foreign” America), they become unlikely “heroes” or central figures in the growing collective madness and depravity, as they see feelings of violence, anarchy and death descent onto the village. One village disaster or perversion follows another in a swift succession to unsettle everyone. It is at this point that –

Ōe brings the depressive, the ugly and the grotesque to the surface in his story and makes everyone acknowledge that it is also humanity, and the denying of this truth for too long will have dire consequences. In that way, Ōe tries to heal the collective wounds through his narrative or at least to expose the wounds to the fullest so that they would have a chance of healing.

There is much in the novel about death. There is a human tendency to obsess over those who have died and the dead are often accorded the reverence since they are perceived as being the people who already gained the “ultimate knowledge”, but paid the highest and ultimate price for it, too:

“Death cuts abruptly the warp of understanding. There are things which the survivors are never told. And the survivors have a steadily deepening suspicion that it is precisely because of the things incapable of communication that the deceased has chosen death. The factors that remain ill defined may sometimes lead a survivor to the very site of the disaster, but even then the only thing clear to anyone concerned is that he has been brought up against something incomprehensible” [Ōe/Bester, 1967/88: 1].

The forest in the story possesses one dreamy atmosphere that helps to erase the line between the past and the present, sinking us deep into that memory, dream or past history which is often told through second-hand accounts (“the power of the forest is growing” [1967/88: 55]). These second-hand accounts put a distance between us and what was or is happening, giving a strong impression of a now forgotten fable. Whether something is true/reality or false/a myth becomes hard to say. What really happened to the older brother of Takashi and Mitsu or to their sister? And, who started the uprising of 1860? How these events relate to the present? One cannot escape from something that has already become part of one, and all the characters experience this at some point. Japan, the village and the characters are still nursing the wounds of the past, which are bathed in shame. Unlike the western concept of “guilt”, the Japanese concept of “shame” cannot be just “cleansed through penance” or be “forgiven by the Lord”. Shame takes its root deep in the human psyche and often can only be dealt with by taking public, violent actions (self-annihilation). By and by, personal considerations and history in the novel necessarily and seamlessly fuse with a broader communal history and consciousness, and such elements as the forest and the storehouse start to stand for something else, such as consciousness or a safe-haven, making the novel rich with thinly-disguised symbolism.

The way Kenzaburō Ōe writes, it seems that the full meaning is within our reach only to escape us at the very last second, leaving us bewildered but also intrigued. The same happens with the characters in this novel, who are always being just on the brink of realisation and understanding, but, at the very last moment, end up too preoccupied with trivialities, taking a step back. The Silent Cry probably has too “comfortable” of an ending, but Ōe must still be applauded for making the experience and the narrative so transformative.

It is impossible not to fall under the haunting spell of Kenzaburo Ōe. The Silent Cry is a dark existential novel filled with unpleasantness and sorrow, but it is also an incredibly fulfilling and deep work with a spark of hope somewhere at its heart. While evoking unsettling and vivid images, the book grapples with the Truth at every corner, trying to find it in the darkness of the forest and through the relationship between the two brothers that, in turn, sheds light on the very meaning of life and the human condition.

15 thoughts on “Review: The Silent Cry by Kenzaburō Ōe”

N. B. The image used in the site header is Shanghaï (Imaginary Cities) by Luc Schuiten, a Belgian architect.