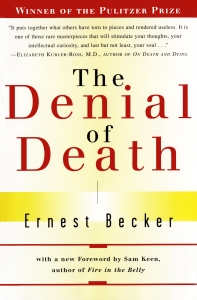 Ernest Becker (1924 – 1974) was a cultural anthropologist whose book The Denial of Death won the 1974 Pulitzer Prize. It deals with the topic that few people want to consider or talk about – their own mortality and death. The paradox is that, although this topic is considered to be a societal taboo, everyone on this earth will have to confront it sooner or later. In fact, Becker argues, everyone is confronting and dealing with it from the moment that they are born – they just do it subconsciously or unconsciously. The Denial of Death delves into the works of Sigmund Freud, Otto Rank and Søren Kierkegaard, as Becker puts his thesis forward that all humans have a natural fear (or terror) of death and their own mortality, and, thus, throughout their lives, employ certain mechanisms (including repression) and create illusions to deal with this fear and live. Though the book relies heavily on the works by other authors, it is also a very deep and insightful read – a cry of the soul on the human condition, as well as a penetrating essay that demystifies the man and his actions.

In his book, Becker has recourse to psychology, psychiatry, philosophy and anthropology, and begins his book by pointing out that, from birth, we feel the need to be “heroic” and cannot really comprehend our own death – the fact that we will die one day is too terrible a thought to live with and, thus, men [sic] never think about their own deaths seriously. People become attracted to a certain “hero” system in society and are conditioned from birth to admire people who face death courageously. This desire stems from a human being both a mortal and insignificant creature in the grand scheme of things and the universe (a simple body), and, at the same time, a human capable of self-awareness, consciousness, creativity, dreams, aspirations, desires, feelings and high intelligence (soul/self). It is very difficult (in fact, impossible) to reconcile these two elements and come to terms with the fact that this human being who has so much potential and awareness can just “bite the dust” and do so as easily as some insect flying next to him/her.

Relying on the work of Sigmund Freud, Becker speculates on child psychology, and goes to detail many mechanisms that human beings employ to escape the paradox outlined above, the condition of the perpetual fear of death, as well as the fact that life and death are so closely interlinked that one cannot live without “being awakened to life through death” [Becker, 1973: 66]. These mechanisms are the creations of various illusions, such as the “character” defence, as well as such activities as drinking and shopping to forget mortality, and various other activities, from writing books to having babies, to prolong one’s immortality. It is precisely the implicit denial of death and decay by everyone in society that makes sexuality such a taboo topic (because it exposes humans’ propensity to be mere creatures that procreate). Thus, death or bodily functions are best deemed forgotten, and, instead, humans set their minds on cultural things to get closer to the idea of being immortal. Love is explained by Becker as the desire to experience immortality through the lover or the love for another person, and one idolises that person to which one is attached to and, in this, way, seeks immortality (“the love partner becomes the divine idol within which to fulfil one’s life” [1973: 160]).

Becker goes to explain artistic creativity, masochism, group sadism, neuroses and mental illness in general through his idea of the terror of death. According to the author, neurosis is natural since everyone holds back from life at some point and to some extent, and Becker also points out that the happier and more well-adjusted a person appears to be, the more successful he is in creating illusions around him and fooling everyone close to him. In fact, it is neurotic personalities out there, those who are generally fearful and socially-handicapped, who really see the true picture and refuse to believe in the illusionary world created by others. Others are merely indulging in their “hellish” jobs to escape their innate feelings of insignificance and dread – men are protected from reality and truth through jobs and their routine – “the hellish [jobs that men toil at] is a repeated vaccination against the madness of the asylum” [1973: 160].

Becker then turns to Kierkegaard and says that religion previously provided an answer for the man to resolve this paradox of death and life, and it is through religion the man could previously finally accept that he would die. There is an urge in every human being from childhood to attach himself or herself to a high power figure (“expand by merging with the powerful” [1973: 149]), and religion provided the means of attachement to be able to transcend a being while remaining a being. Religion provided a comfortable answer to death, while enabling people to develop and realise themselves. However, now, the modern man cannot have recourse to that religion because it lost its conviction and he [sic] no longer believes in the mysterious. The modern man is stranded and lost, trying to reach his immortality by other means, sometimes through very undesirable means. The solution that Kierkegaard proposes is the “knight of faith”, who accepts everything in life and has faith – “the man must reach out for support to a dream, a metaphysic of hope that sustains him and makes his life worthwhile” [1973: 275].

The downside of Becker’s book is that it relies too heavily on what others have said before Becker, including Sigmund Freud, Otto Rank and Søren Kierkegaard, and there is this feeling that the whole book is merely a summary of other authors’ positions, including those of William James and Alfred Adler. It becomes difficult to distinguish Becker’s views from those he quotes so extensively, praises and criticises. Becker’s account is also very individualistic, with his thesis stemming from the premise that a human being is a very selfish being who primarily desires to make his own voice heard. In that vein, the author pays little attention to more collectivist and altruistic aspects of the human nature, and barely mentions such elements as self-sacrifice, suicide or Buddhism – though they are all very relevant to his topic. This is coupled with the endless repetitions by Becker, as well as his tendency to over-simplify human behaviour, reducing it to just a single driving force.

Though hardly ground-breaking, The Denial of Death is, nevertheless, an essay of great insight which puts other people’s ideas intelligently together to become an almost essential read since the ideas put forward can really open one’s eyes on many things in life, and on how and why the man does what he does in life.

12 thoughts on “Review: The Denial of Death by Ernest Becker”

© Thoughts on Papyrus, 2018-2021. Unauthorised use and/or duplication of any text on this website without express and written permission from this site’s author is strictly prohibited. Excerpts and links may be used, provided that full and clear credit is given to Thoughts on Papyrus with appropriate and specific direction to the original content. In using book covers or other images on this site, no copyright infringement is intended by the site author.