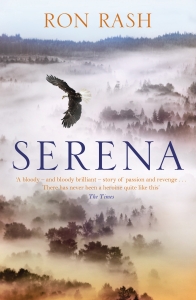 I am progressing splendidly with my “Appalachian States” Reading Challenge, and this review is another addition to cover the state of North Carolina. Will at Coot’s Reviews suggested that I read Serena by Ron Rash for my challenge, and both H.P from Hillbilly Highways and Emma at Book Around the Corner also recommended that I read Rash’s work, so thank you! Especially since Serena pleasantly surprised me. This novel tells the story of a newly-wed couple the Pembertons who arrive to a logging community high up in North Carolina Mountains to take over a timber business there. Every worker at the camp is awed by Mrs Serena Pemberton, a woman so strong-willed and determined she can match any man’s will power or shrewdness. Masterfully-executed and beautifully-written, Serena evokes vividly both the beauty of North Carolina’s landscape and horrors involved in the business of cutting trees to make profit. Ron Rash even packs in the novel “slow-burn” suspense since Mr Pemberton’s past actions give rise to unforeseen consequences, and, as the couple arrive to North Carolina, with them also descends upon the village something disturbing and sinister.

The pleasure of reading Serena is that the author does not reveal much in the beginning, and we find out the true nature of every situation and the true nature of every character in a slower, almost suspenseful way. There is almost some kind of a mystery at the core of Serena even though it is not a mystery novel at all. It is historical fiction and the year is 1929. When Pemberton and his wife Serena arrive to North Carolina to join Campbell, bookkeeper, in overseeing the running of a large timber business, they immediately begin to plot how to make the business even more profitable and not lose land. The drama starts when it is clear that one of the camp’s servant girls, Rachel, gave birth to Pemberton’s son.

When reading the novel, it is impossible not to plunge straight into the strange world of a logging community situated deep in the mountains of North Carolina, and the novel is so evocative that, when reading, very vivid images emerge of the cold mountain air, swings of workers’ axes and cries of birds in the distance. In that region, the farm land is described as being “rocky and hilly”, and people there also endure long winters, loneliness and living almost without sun (since mountains shut it out) [Ron Rash, 2008: 196].

Ron Rash is almost too subtle as he introduces violence and horror that happens amidst all the idyllic natural beauty. Most of the time violence or horrifying images come unexpectedly or are mentioned in passing between workers who chat while taking their break at the camp. That makes the story even more effective. It seems as though danger is hidden at the camp but also ever-present and all around, and that makes the situation even more frightening since the danger source is not well understood and, when it is understood, it seems unbelievable.

“When Pemberton returned to the North Carolina mountains after three months in Boston settling his father’s estate, among those waiting on the train platform was a young woman pregnant with Pemberton’s child. She was accompanied by her father, who carried beneath his shabby frock coat a bowie knife sharpened with great attentiveness earlier that morning so it would plunge as deep as possible into Pemberton’s heart” [Ron Rash, 2008: 3].

It is a little unexpected to see hints of explicit violence in the opening paragraph, but the effectiveness of that paragraph is also undeniable.

Needless to say, the title character is the centrepiece of this American saga. Serena is portrayed as being an extraordinary woman who is proud and not intimidated by the opposite sex, a kind of femme fatale. She sees men as her equals, and even some (most?) as being inferior to her. Serena is an intriguing character as her past remains largely obscure in the story, apart from common knowledge that her father owned the Vulcan lumber company in Colorado and she is well-educated. Her romantic relationship with Pemberton is also portrayed as a sexually-charged union of equals with transcendental elements to their pairing/fusion: “Pemberton felt again what he’d never known with another woman – a sense of being unshackled into some limitless possibility, limitless though at the same time somehow contained within the two of them” [Ron Rash, 2008: 15].

Even Ron Rash’s secondary characters seem fully-fledged and memorable, including Galloway’s mother and Doctor Cheney. People at the camp in the plot come across as poverty-stricken individuals who will do anything to work and, therefore, survive, even if it means working in perilous conditions, where losing a vital limb and or even life is only the next axe-swing away. In this sense, Serena also has a theme of workers’ exploitation: “some used cocaine to keep going and stay alert, because once the cutting began a man had to watch for axe blades glancing off trees and saw teeth grabbing a knee and the tongs on the cable swinging free or the cable snapping” [Ron Rash, 2008: 24].

If I were to judge this book for its first two hundred pages, it will probably be a straight five-star rating on my part. Unfortunately, Serena loses some of its potency and subtlety in the second half. The subtle danger which made the book so good in the first half gives way to cheap thrills in the book’s second half and, although the tension increases, the reader’s interest may also wane.

Ron Rash’s Serena surprises with its understated brilliance, including its evocative language. The story is atmospheric and its main character – unforgettable. Even though much horror is implied in the novel, it makes the story somehow even more intriguing and effective. Ron Rash is a talented writer and I am looking forward to reading more of his work in future.